Mood! In a rare candid moment, Queen Elizabeth II was caught on camera on Tuesday, May 10, saying several Chinese officials were “very rude” to Barbara Woodward, the British ambassador to China, during a visit in 2015.

According to the Associated Press, the queen, 90, made her strong remarks at a rainy garden party at Buckingham Palace. The chat kicked off with senior palace official Lord Chamberlain introducing Queen Elizabeth to police Commander Lucy D’Orsi, who was part of the British ambassador’s visit to China to meet with Chinese President Xi Jinping in October 2015. 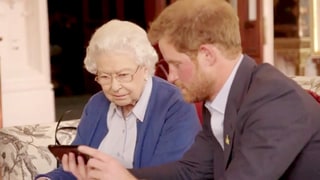 
Quirky Facts About the Queen’s Wardrobe


The purpose of the visit at the time was to bolster trade between the two countries. The queen bluntly complained to D’Orsi about how the Chinese officials treated Woodward during her visit.

“They were very rude to the ambassador,” the British royal monarch, great-grandmother to Prince George and Princess Charlotte, said in the conversation captured by the palace’s official cameraman. Though reporters standing near the queen didn’t overhear her remarks, the camera footage caught the full conversation.

D’Orsi told the queen how she accompanied Woodward to China, and shared how things fell apart.

“Oh!” Queen Elizabeth replied, according to the AP, which received the footage. “Bad luck.”

D’Orsi then recalled one specific meeting between Ambassador Woodward and Chinese officials. “They walked out on both of us,” she shared. “It was very rude and undiplomatic, I thought.”

PHOTOS: Celebrity Feuds: The Biggest Ever!

The queen noted that the moment was “extraordinary” — and she didn’t mean that in a positive way. Queen Elizabeth’s declaration is unusual because she generally doesn’t speak out on foreign and political matters.

China was seemingly miffed about the comments, and censored Queen Elizabeth’s remarks by cutting off the BBC’s signal within its country, the AP reported.

This isn’t the only recent incident for the palace. Also on Tuesday, British Prime Minister David Cameron created a hoopla when he was heard calling Nigeria and Afghanistan “possibly the two most corrupt countries in the world.” Cameron has organized an anti-corruption summit in London, that will be attended by both Afghanistan and Nigeria this week.

Want stories like these delivered straight to your inbox? Sign up now for the Us Weekly newsletter!

Who Is Ryan Dorsey? What We Know About Naya Rivera’s Ex-Husband